In English, Let the World Know All About COVID-19

January 30th 2020, WHO has declared the outbreak of novel coronavirus 2019 a Public Health Emergency of International Concern (PHEIC). On February 9th, the disease was officially named Coronavirus Disease 2019 (COVID-19) by WHO.

Many year later, as they sought in memory about the beginning of 2020, all of the Chinese people were to remember that distant days when their motherland was in the testing by the challenge of COVID-19 pandemic, as said of the WHO Director General Tedros Adhanom, what is a common enemy that does not respect borders or ideologies. 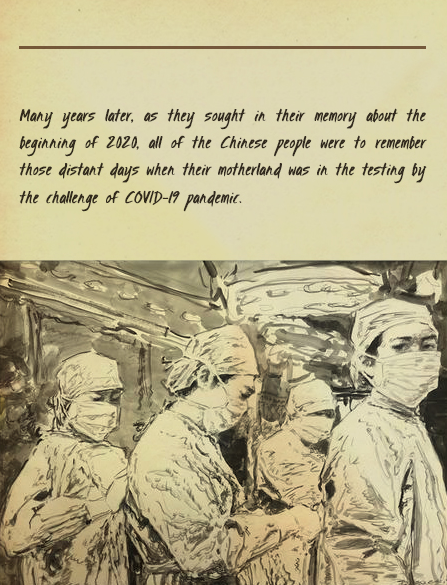 On Thursday, February 13, 2020, officials added more than 14,840 new cases to the tally of the infected in Hubei Province alone, bringing the total number of the COVID-19 confirmed cases to 48,206, the largest one-day increase so far recorded. In the meantime the total confirmed infected cases in China rose to 59,900, and the death toll in China rose to 1368, including 254 new. Doubtless, the epidemic has already became one of the most serious concerns worldwide.

“And it causes confusion and spreads fear to the general public”, said Dr. Tedros Adhanom. In the meantime, aside from the most rigorous ever quarantine, a series of measure was adopted by the central government and municipalities of China. Both of the factors are now breaking the ordinary life of each one of the Chinese people, and disorganizing the normal rhythm of economic and social development.

Thousands of striking headlines spread by variety of popular We Medias in China, are trying to add more on the already serious anxiety of Chinese people.

Finally, can we survived in this deep cold and long winter?

Yes, we can, as all of our country have united and organized for the actions. In the past weeks, miracles are made one by one in the witness of the world.

“That containment efforts were working”, “Coronavirus Cases Seemed to Be Leveling Off.”, those were said by the New York Times on Thursday, February 13.

According to the International Air Transport Association, more than 50 countries or territories have imposed travel restrictions and tightened visa requirements to contain the COVID-19. I believe the measures could be understood by the Chinese people, as the strict isolation and temporal regulations are also being deployed to have the outbreak controlled. But it should not  be acceptable if the isolations are not only limited to the epidemic but also to the international cooperation of China's economy and technology.

So in the meantime,

The international cooperation is our priority concern, as we have committed to it from the beginning of 2011, the establishment of International Technology Transfer Network, ITTN. Although, because of shortage both in knowledge and resources to directly fight against the outbreak, we missed the first time responses when COVID-19 began in China, we still want to contribute from the perspective of international cooperation. We think it is necessary to spread the right information to the world, particularly, it is necessary to be in English.

And that is why we think we should do this, to give a series of contents on We Media, titled as “In English, Let The World Know all about COVID-19”.

The above mentioned article of the New York Times also mentioned, “The news seemed to be positive: The number of new coronavirus cases reported in China over the past week suggested that the outbreak might be slowing”, in spite that the daily officials added more than 14,840 new cases to the tally in Hubei Province, and the number of the infected is the highest ever since the beginning,“the sharp rise in reported cases illustrates how hard it has been for scientists to grasp the extent and severity of the coronavirus outbreak in China, particularly inside the epicenter, where thousands of sick people remain untested for the illness.”